I had the great pleasure of taking some lessons over the years from the great UK based pianist John Taylor. In all our meetings John was candid, forthcoming, funny, and present.  As an improviser, pianist, and composer his output stands as an prime example of a jazz musician who had reached the pinnacle of what is possible musically, a musician who's expression transcended the piano and reached a wide audience.

Of course like many others I came to know John's music through the recordings of Kenny Wheeler. There was a time during the '90s that Wheeler's recordings and concerts were mandatory listening for any student of jazz. Wheeler himself presided over us godlike in his stature as a band leader and sideman, a superlative improviser, also constantly humble and self-depricating. Taylor bared a resemblance to Wheeler in that he was both an energetic and astonishingly advanced and fearless improviser and yet quiet and humble in person.

One group that John participated in during this time was the Peter Erskine trio. Although they only managed to release 4 records that I know of each one reached new levels of group interaction. Featured prominently in this group were the compositions of Taylor himself. The following tune was always one that captured my imagination as I found I could follow it melodically and harmonically and at the same time feel lost a bit. That feeling of being both oriented in the music and yet lost is definitively what characterizes Taylor's compositions for me. 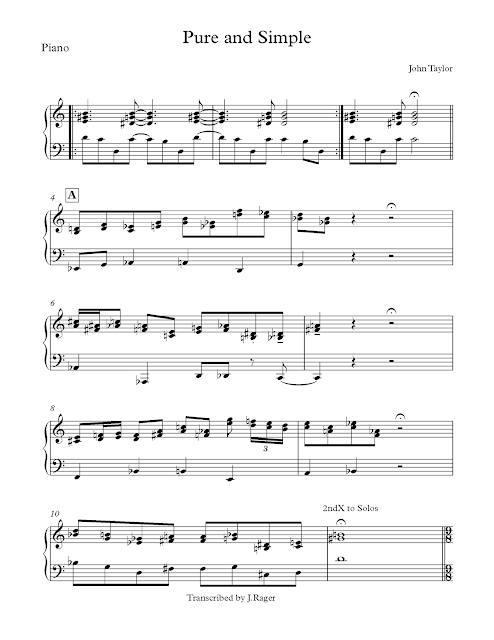 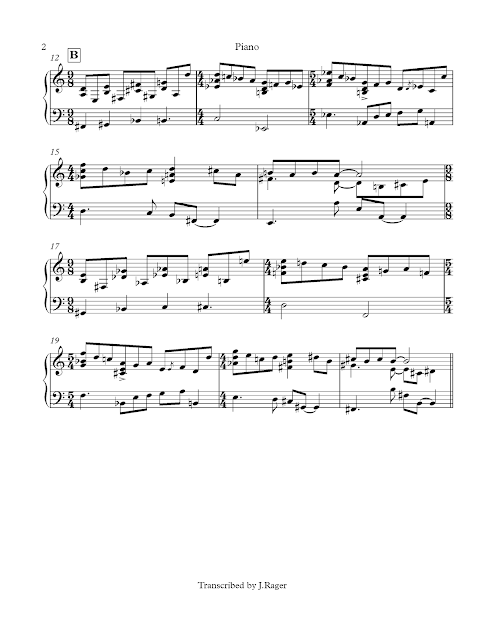 In this example we see how Herbie uses his rhythmic concept in combination with upper structures to generate melodic material. The example was chosen because it shows both the use of triads and 4ths structures as upper structures. The first system is a vertical rendering of the melodic line to show both the type of upper structure as well as the harmonic rhythm. Note that the harmonic rhythm is displaced by a triplet eighth which we already saw in Part IV. This displacement seems to be Herbie's favourite way of playing his signature polyrhythmic groupings. I would consider to be the foundation of Herbie's rhythmic concept in general. 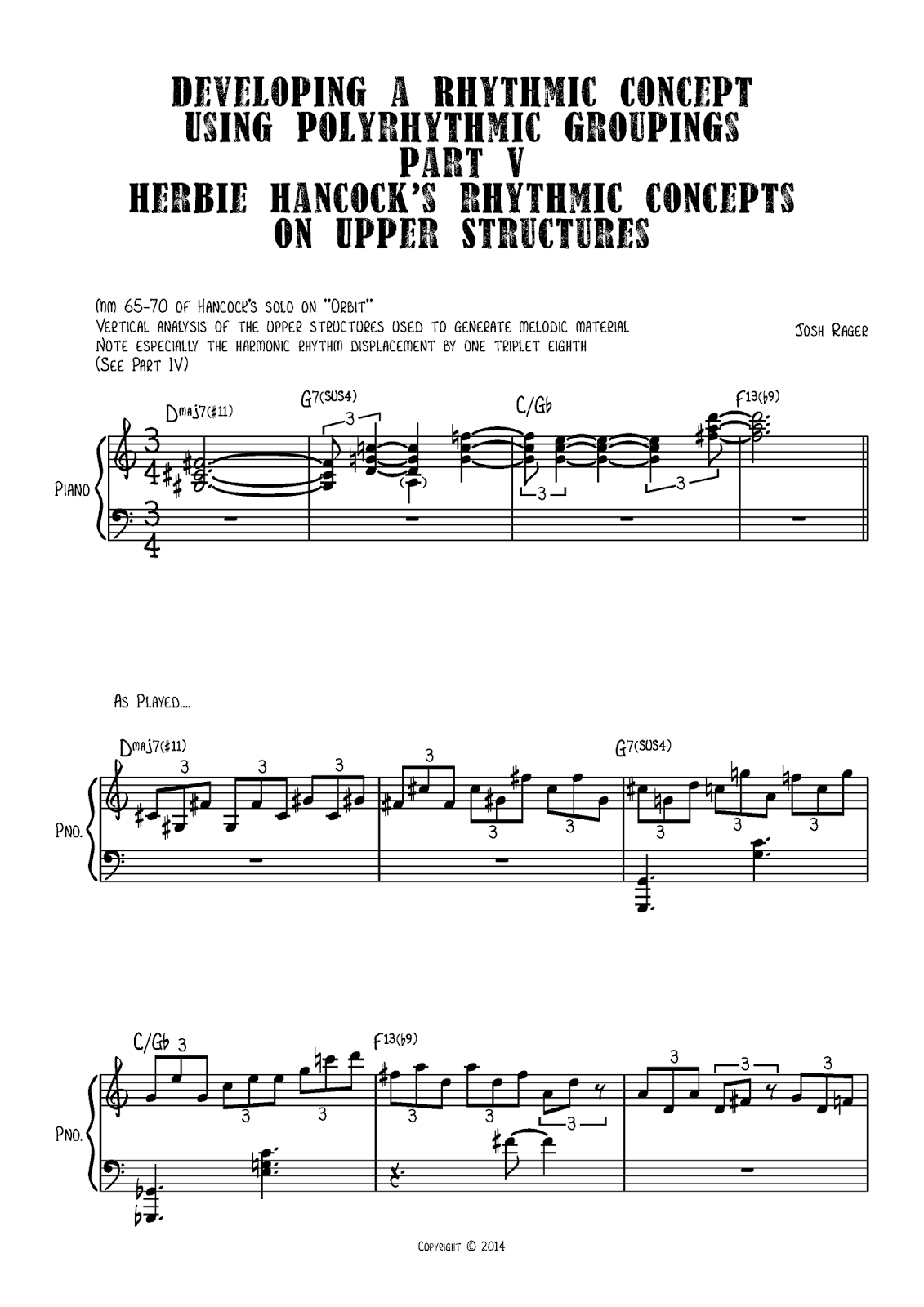 Posted by Josh Rager at 2:55 PM No comments:

Here is another example of the kinds of lines you can build using Herbie's Eighth note groupings. The chord progression is a II-V7-I turn around. Note that it is possible to displace the beginnings of the groupings. You can basically start on any of the 3 triplet subdivisions. Also by combining eight and quarter note triplets you can create larger grouping. This quickly becomes complex as it modulates the meter. So make sure when you're practising longer phrases that you teach yourself how to resolve metrically modulated phrases. As you'll see the more complex your rhythmic concept the more easily it is to train wreck your solo! 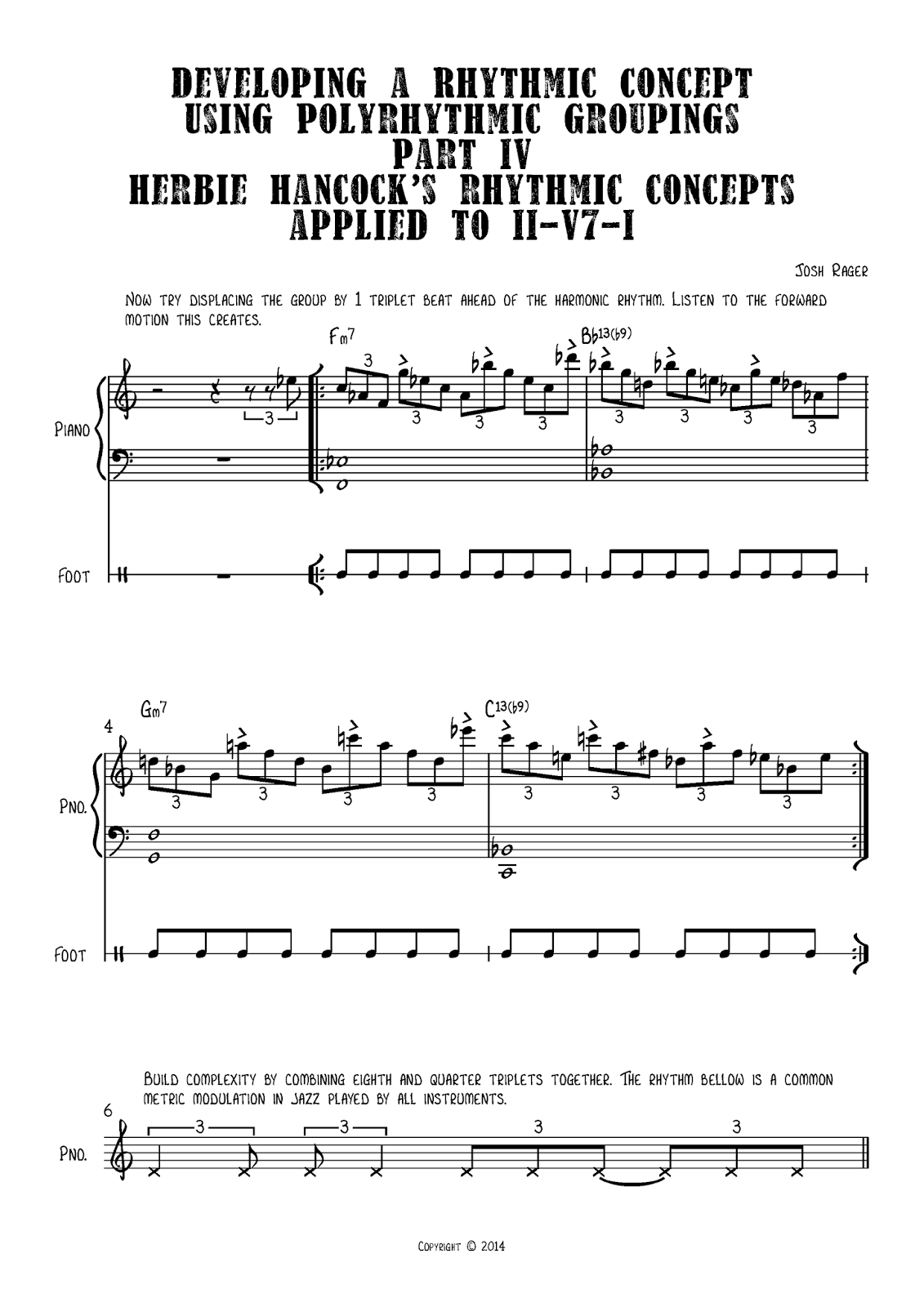 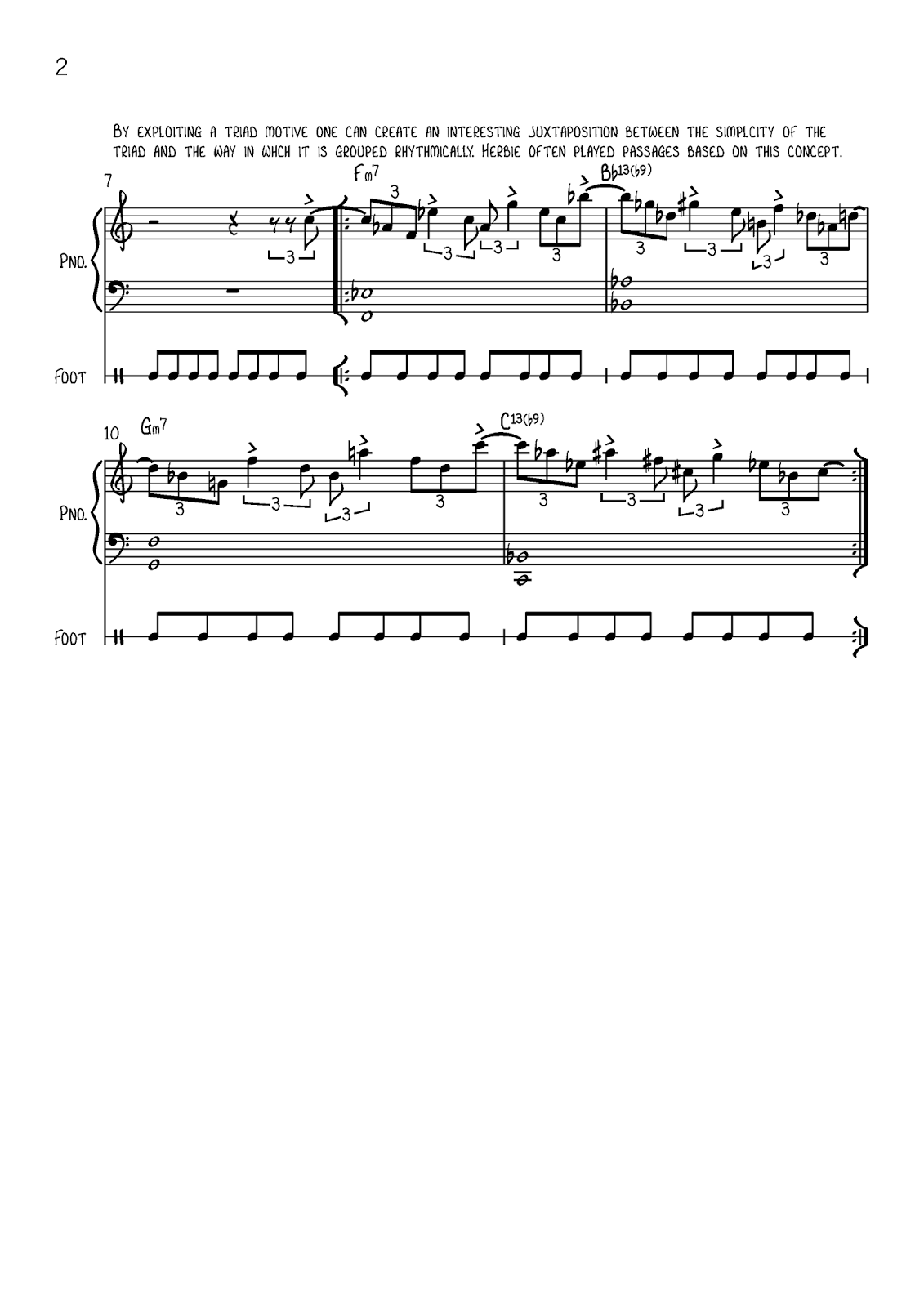 Posted by Josh Rager at 9:31 AM No comments:

Ok so now that we've been trying to think more like a drummer both at our instrument and away from our instrument I though it would be instructive to find some real live music performances to model and study. Remember the goal is to try and use polyrhythms and formulate some new concepts in your own improvising. The example I've chosen is from my own mentor Herbie Hancock who is someone I've spent a lot of time studying and emulating.

Herbie has had some very developed rhythmic concepts in his playing ever since he burst on the jazz scene in New York at the young age of 21. I find it exhilarating to follow the development of how Herbie expands on these concepts throughout his career. Recordings of Herbie from 2015 next to recordings of him from 1962 bear an incredible resemblance in the way Herbie presents his conceptual elements of rhythm, harmony, and melody. And yet we also hear a remarkable maturation and deepening of these musical elements.

The clip below is from 1964 and demonstrates one of Herbie's hallmark rhythmic concepts. After navigating the changes during the exposition part of many of his solos Herbie is then able to continue to build intensity by using some basic polyrhythmic groupings in different interesting ways. In this case he's basically taking a scale and organizing it into subdivisions of quarter note triplets.

The exercise below demonstrates a way of taking Herbie's rhythmic concept during the last part of his solo. The bar numbers are a bit messed up because I transcribed the solo off the original released recording in which Herbie's solo is heavily edited to take out 2 choruses of material. But just advance the solo to the end part where they stop blowing on the form and are vamping over a II-V7-I-VI cycle. 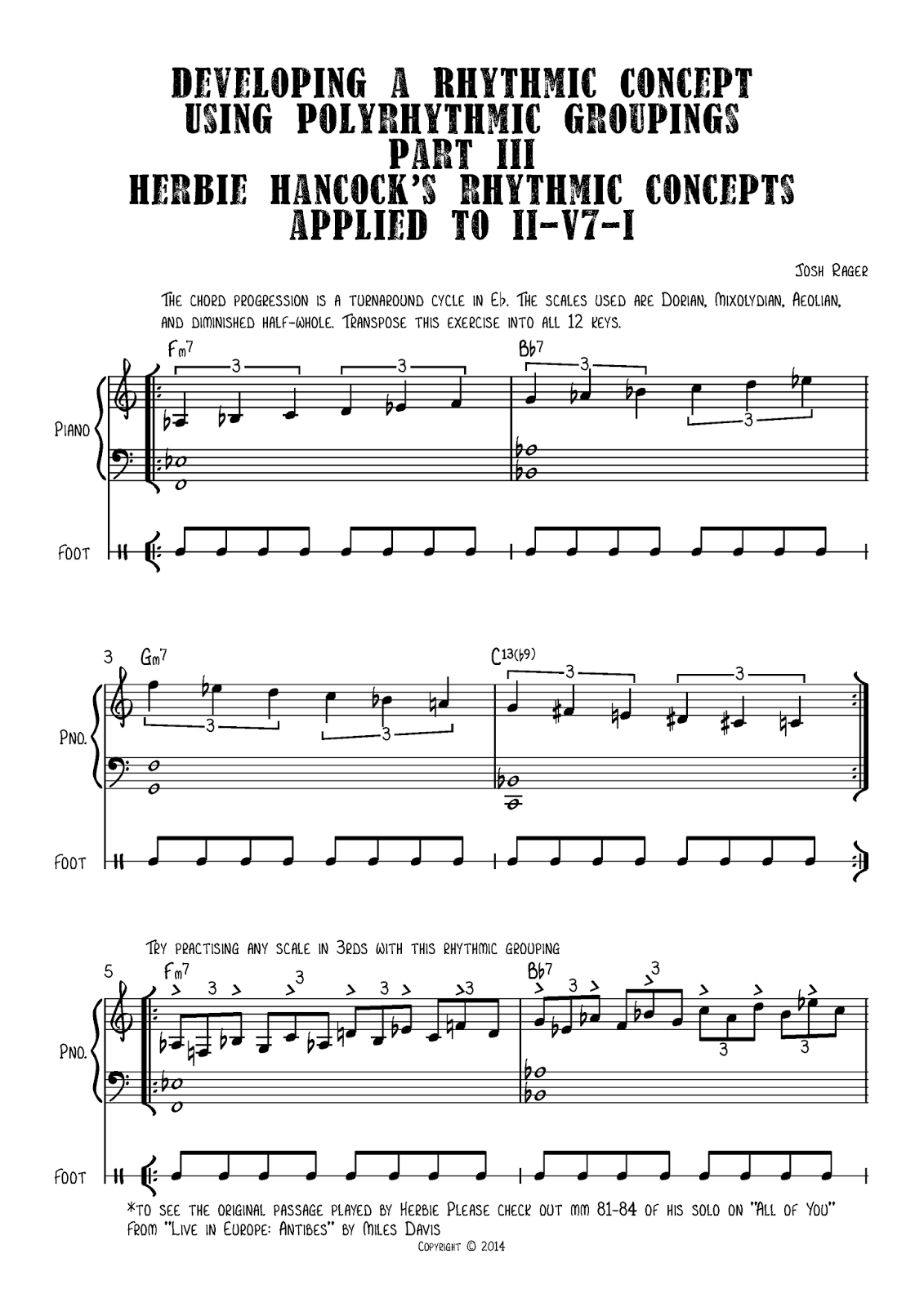 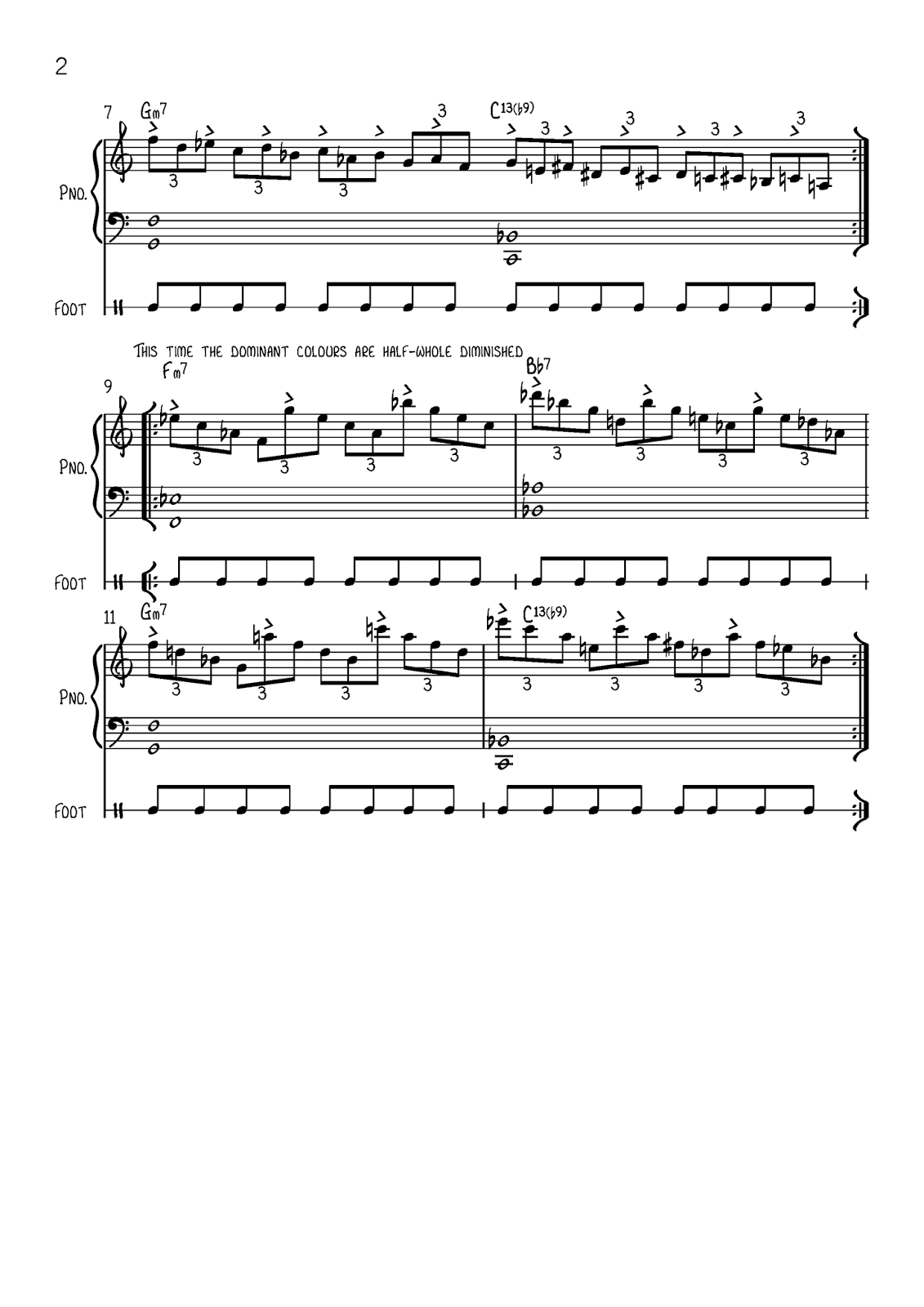 This week we are going to continue with some examples of how to use our polyrhythmic groupings.  For this exercise I've changed the harmonic/melodic colour to the Lydian mode. Although the result might sound a little "new age-y" you might use it to begin to see the possibilities of applying a rhythmic concept to any chord/scale.  Next post we'll take a look at how one of my favourite jazz pianists, Herbie Hancock, uses polyrhythmic groupings in his solos. 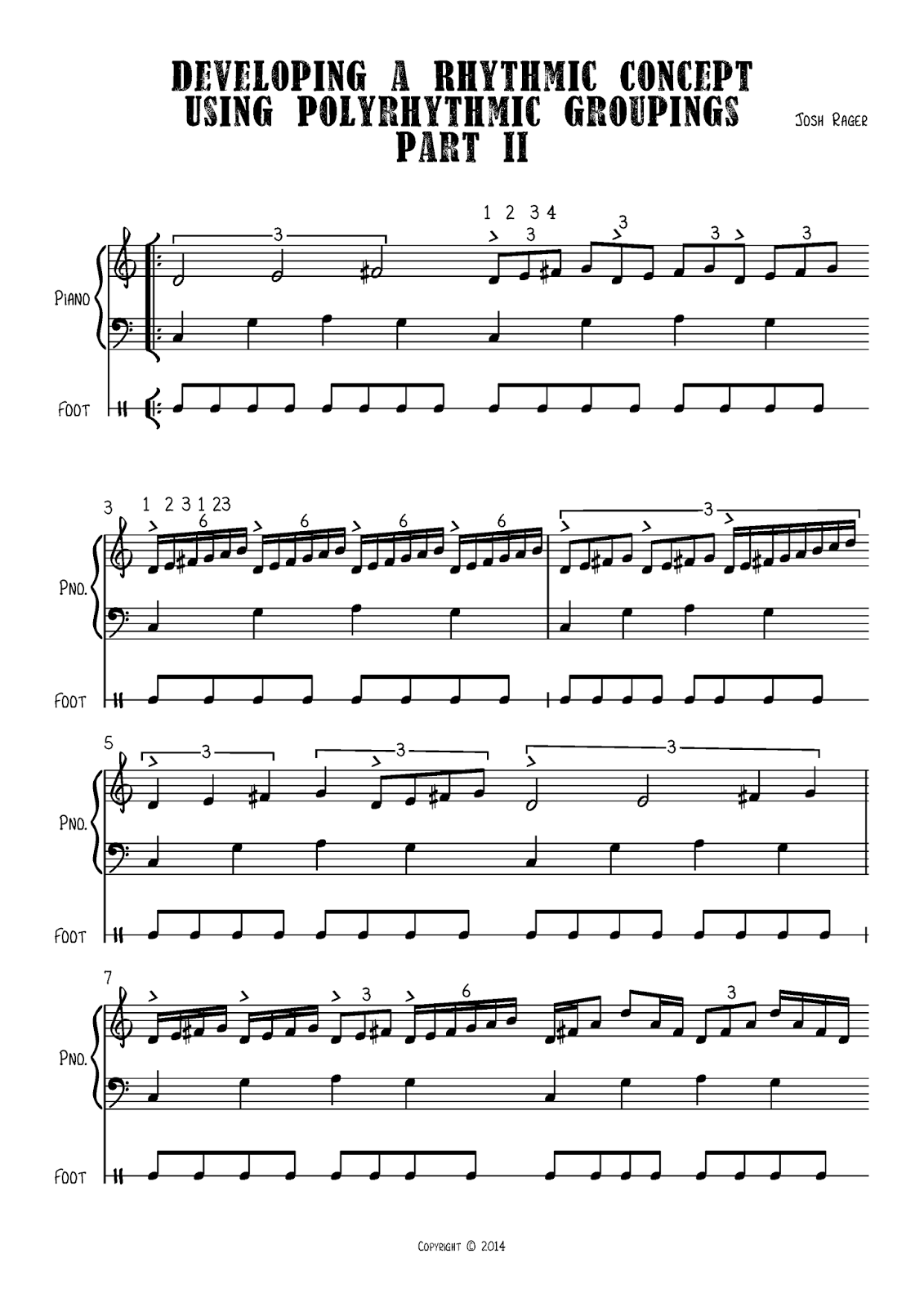 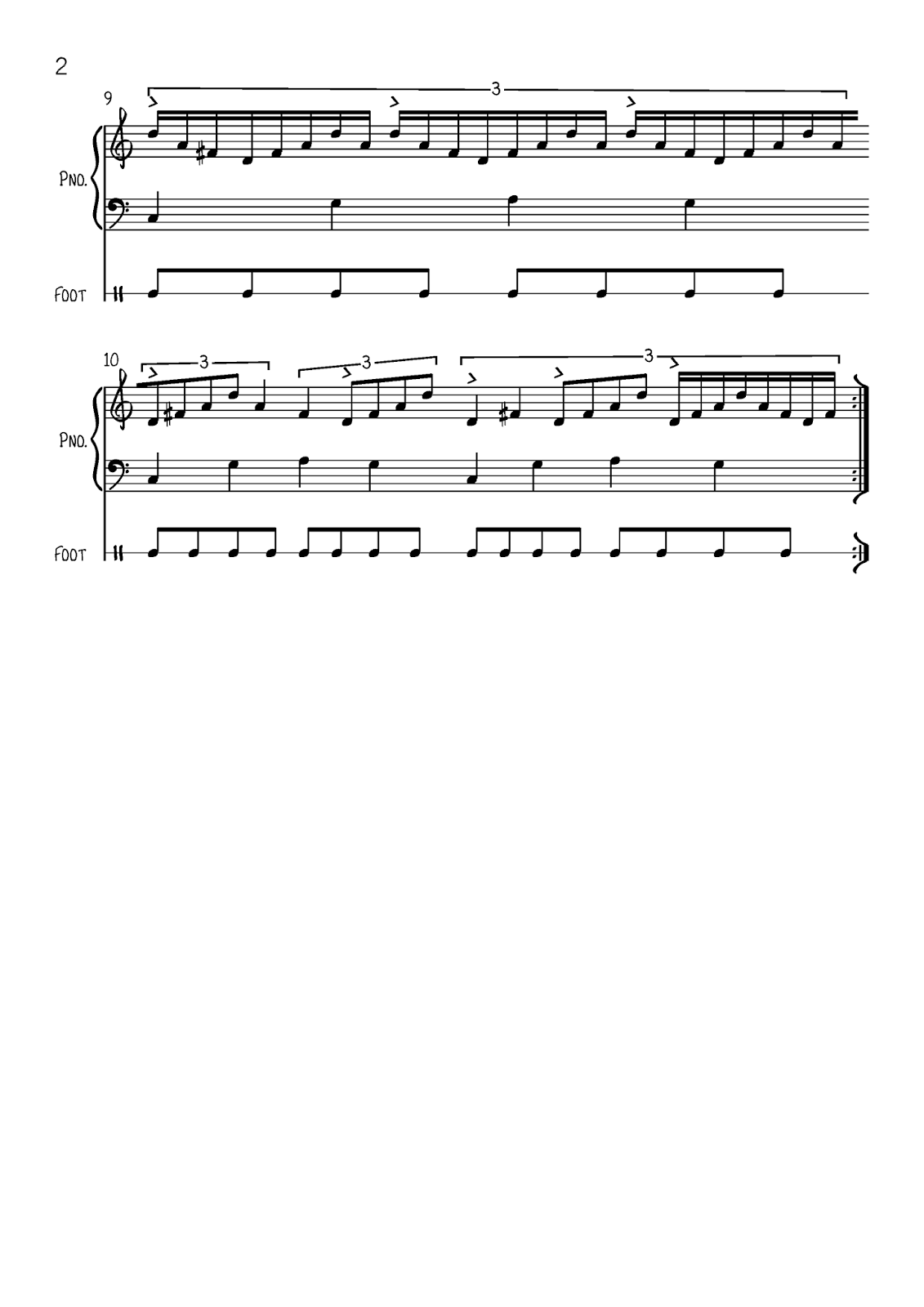 Happy new year! To everyone who, like me, is wondering where the time went from last year allow me to introduce an new topic on time...

When I talk about a rhythmic concept in our playing I'm referring to a way of approaching and thinking about improvisation that puts rhythm as the chief organizational concept. Music of course has to have rhythm as well as melody and harmony (or does it?) at least the kind of soloing that I'll be referring to in the next few posts. What I'll be illustrating is the way in which I've been able to relate some of the rhythmic exercises I developed in the "Think like a drummer" posts to my instrument, the piano. I've attempted to make a few of the exercises playable by both pianists and non pianists alike. Because of the way in which playing the piano co-ordinates two hands it's useful for all instrumentalists to work on these exercises as a way of internalizing the concepts. Later I'll analyze a solo by Herbie Hancock to demonstrate how a true master uses them.

For the first exercise I've taken the octatonic scale and divided it equally between the two hands. Once you've finished learning these make sure you try switching hands. Alway put the metronome on and keep tapping your foot in eighth notes. 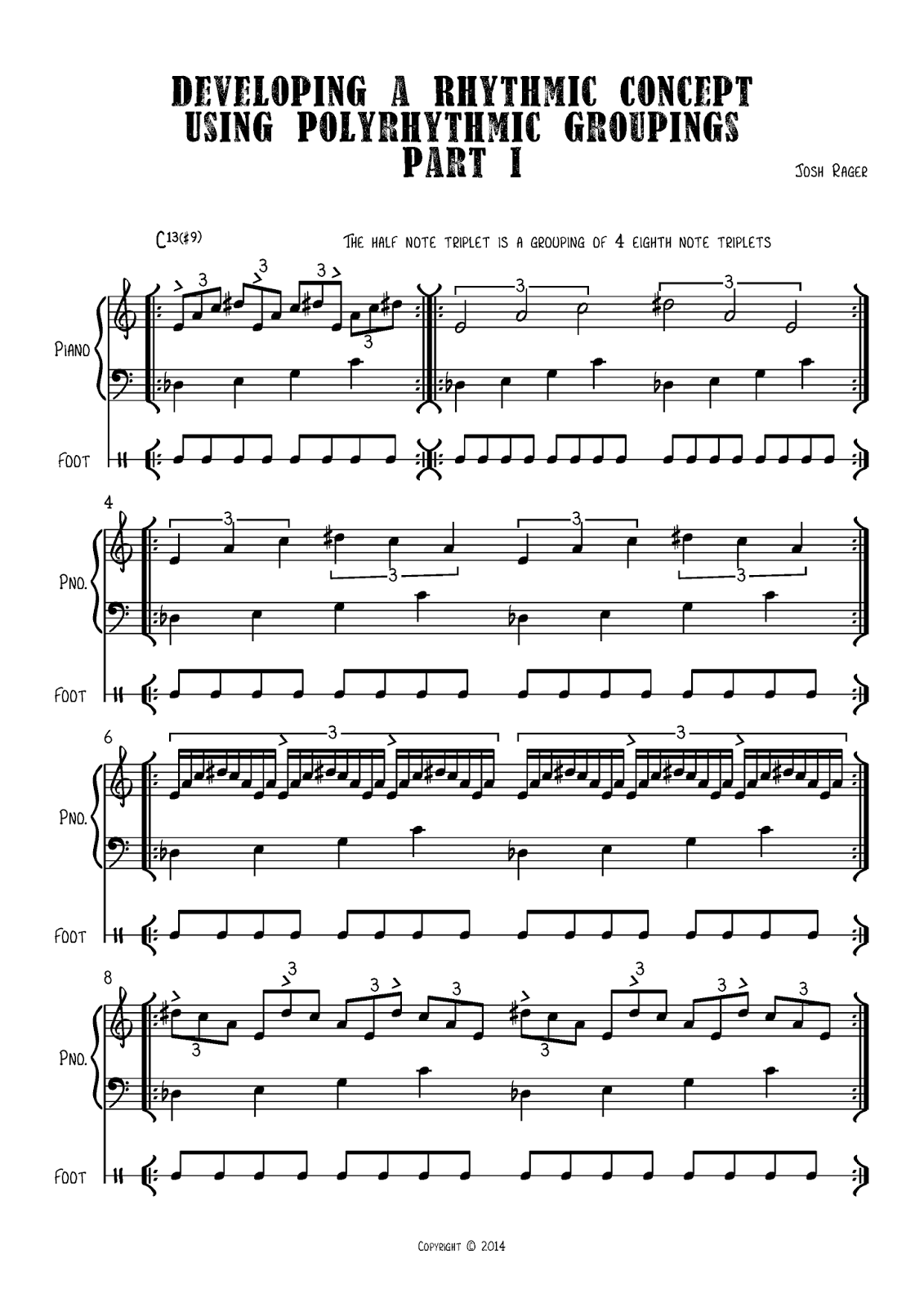 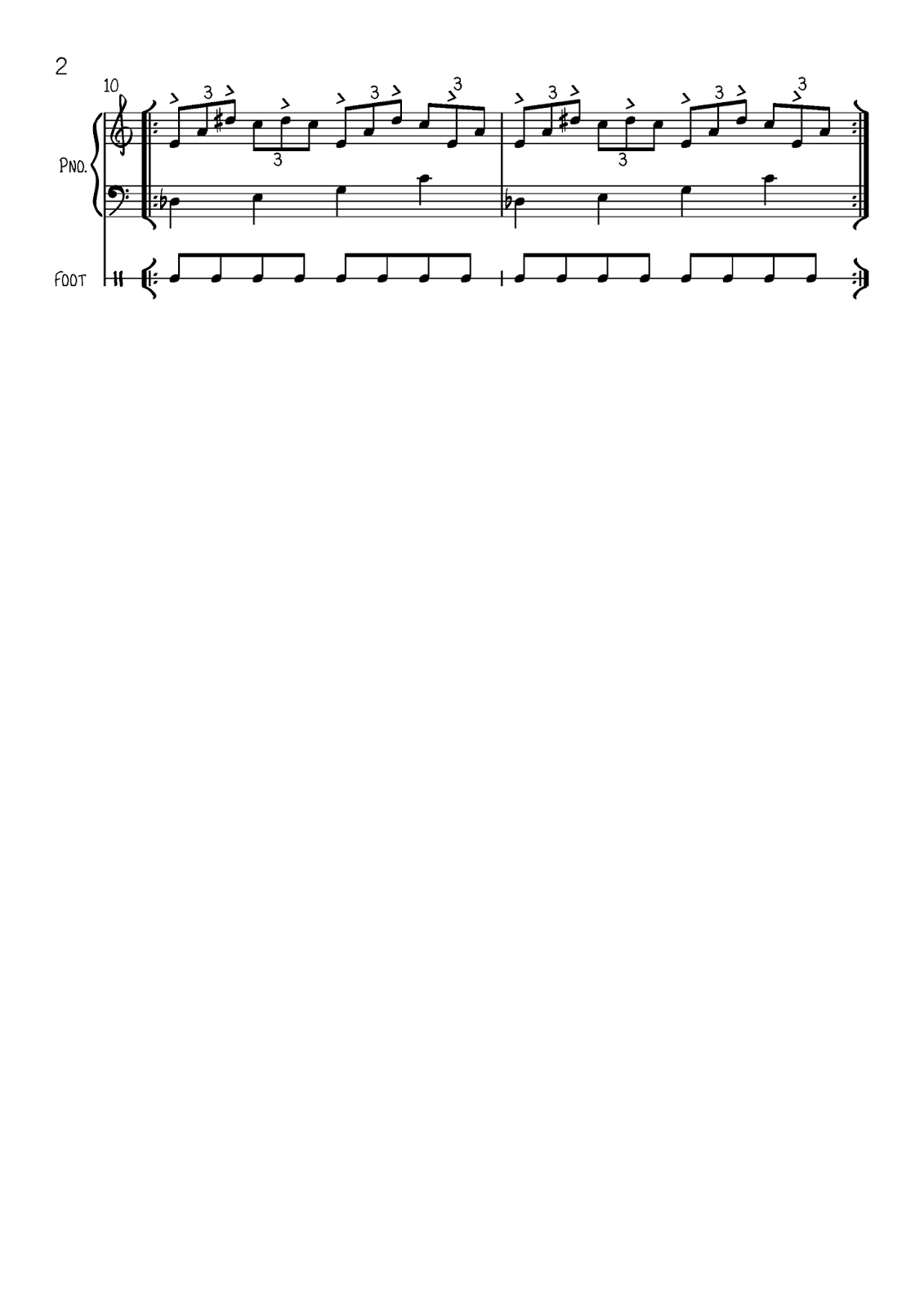 Posted by Josh Rager at 9:54 AM No comments:

This week we had the pleasure of hosting some great workshops and concerts with the wonderful Danilo Perez. Perez's energy, positivity, and musicianship was all very inspiring for both the faculty and the students at McGill and I'm sure we'll be discussing our experience with him in the weeks to come. 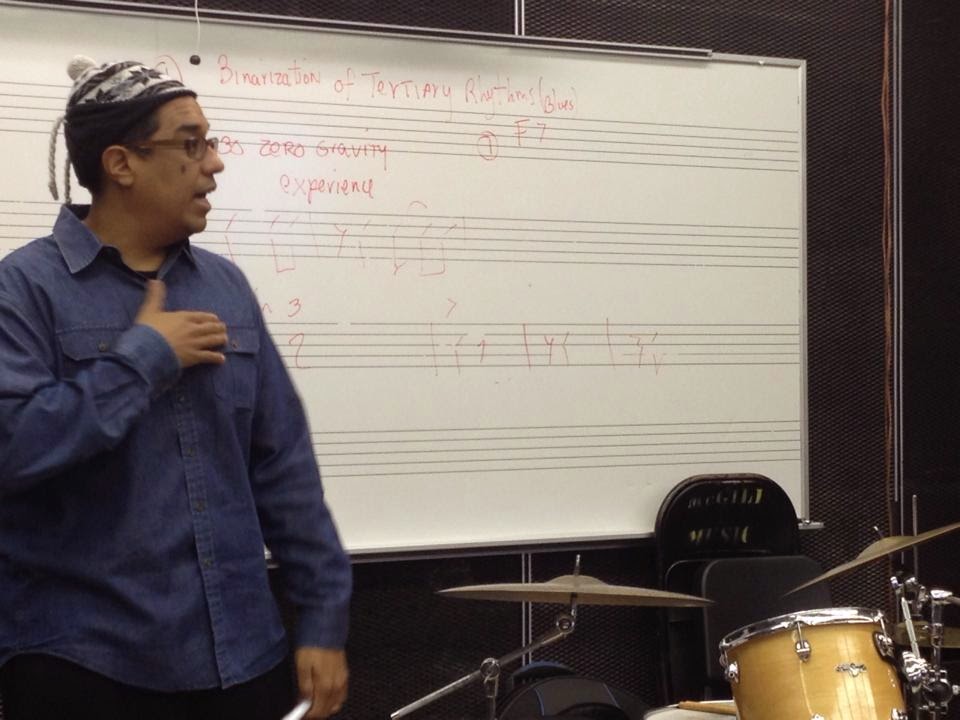 I first heard Danilo on records back in the '90's playing trio with John Patitucci and Roy Haynes. Among many of his earlier mentoring experiences was his tenure in Haynes trio where he began to establish his reputation in the global jazz scene. I was always struck by the combination of elements and styles present in Perez's playing. Even today at times one hears a strong influence from Herbie Hancock coloured with the Latin Amercian rhythms he no doubt absorbed from his upbringing in Panama. However to name drop Hancock's influence on him doesn't adequately describe his overall musical presence in any of the ensembles he performs in. When I've had the pleasure of witnessing a concert by the Wayne Shorter quartet I've been deeply impressed by his spirit of commitment to the music being created in the moment. His musical personality is obviously one that puts emotional communication ahead of stylistic or even pianistic concerns. It's almost as if he's trying to get away from sounding like a pianist, something one might even say about Shorter's playing as a saxophonist.

One record of Danilo's that I find particularly beautiful I think in large part due to what seems to be his love of songs regardless of the style in which they are composed is a Verve release from 10 years ago entitled "...till then". The record features music by Joni Mitchel as well as the song "Overjoyed" by Stevie Wonder. Hear a preview of the cd here

Please let me know if you agree with my chord symbols…. 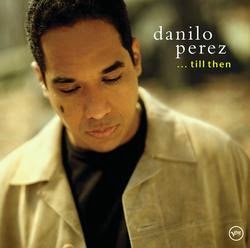 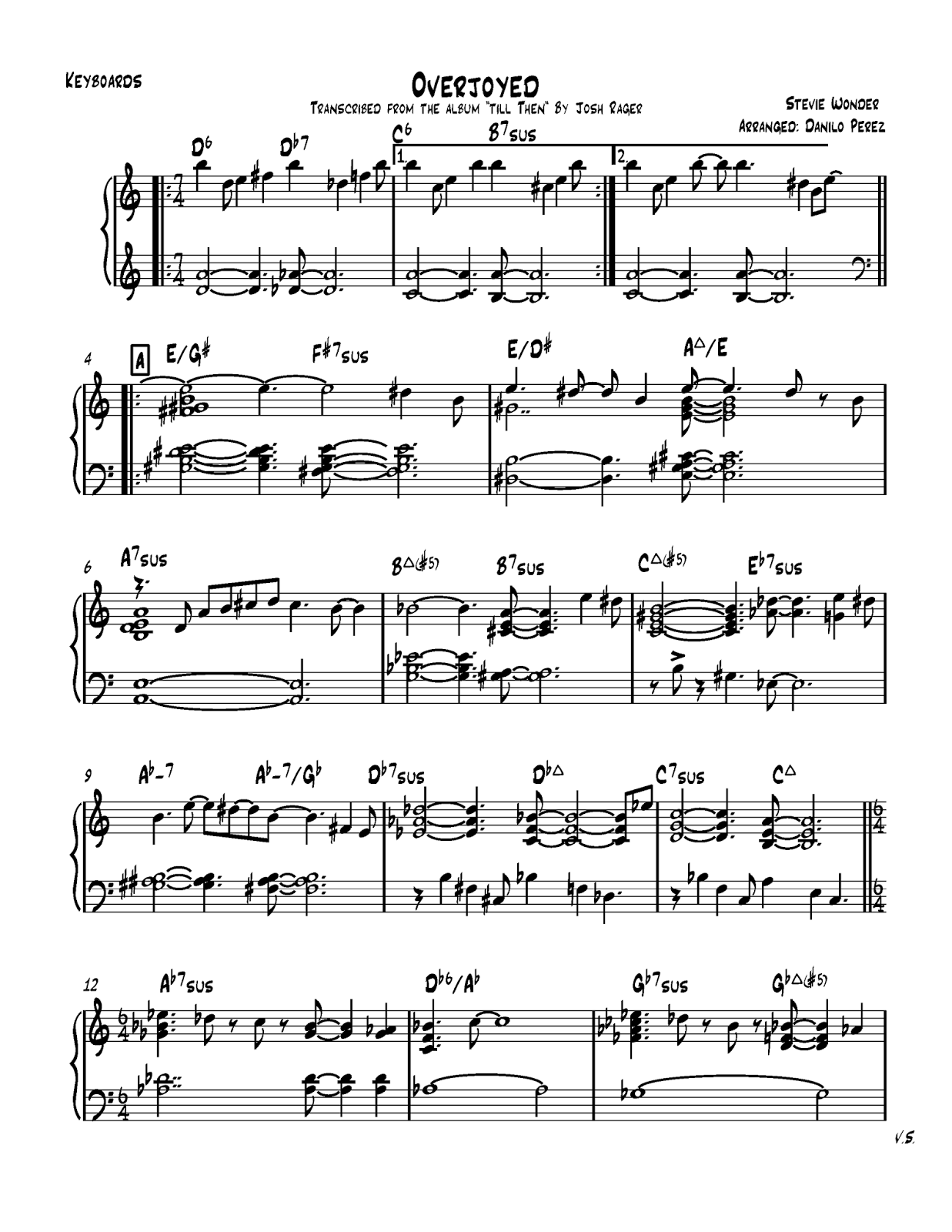 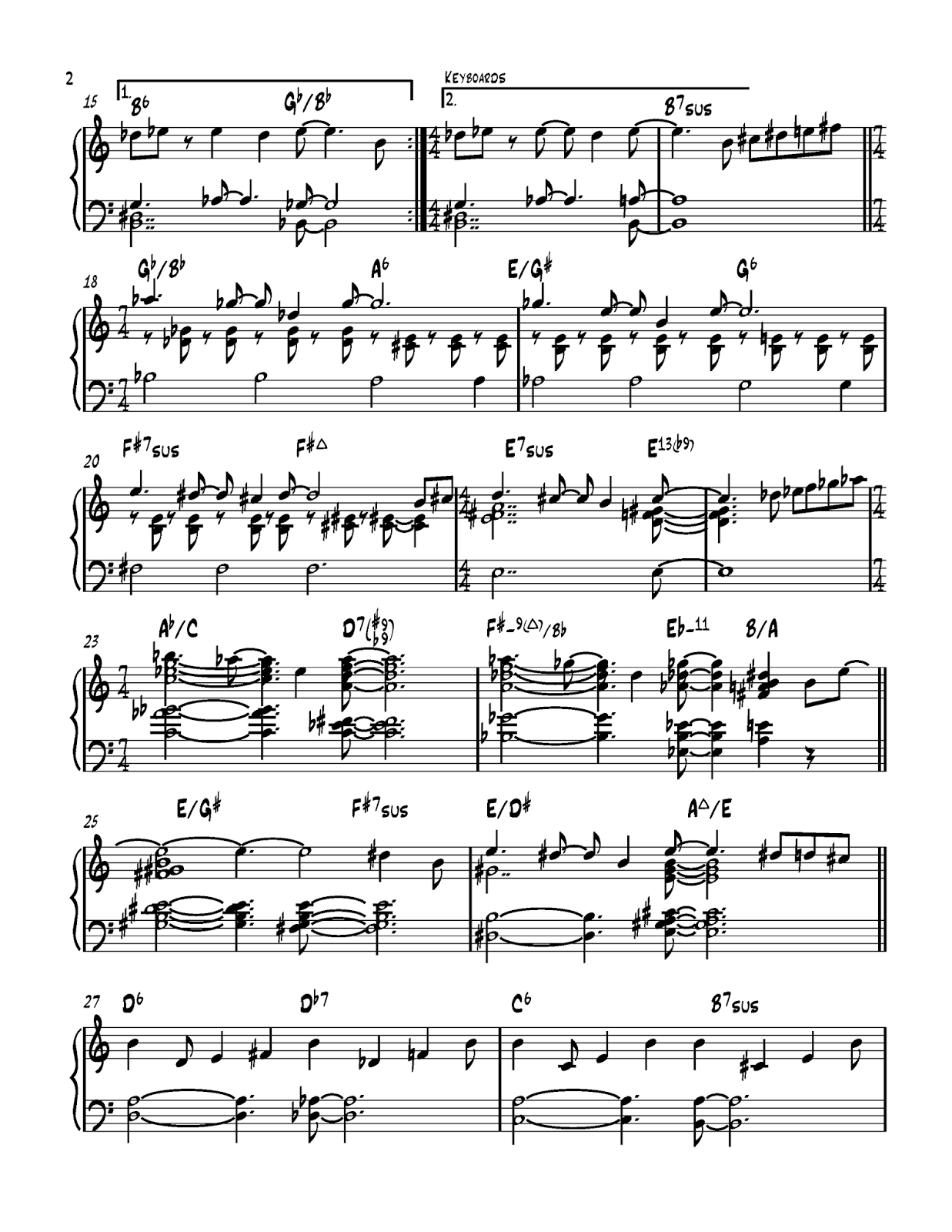 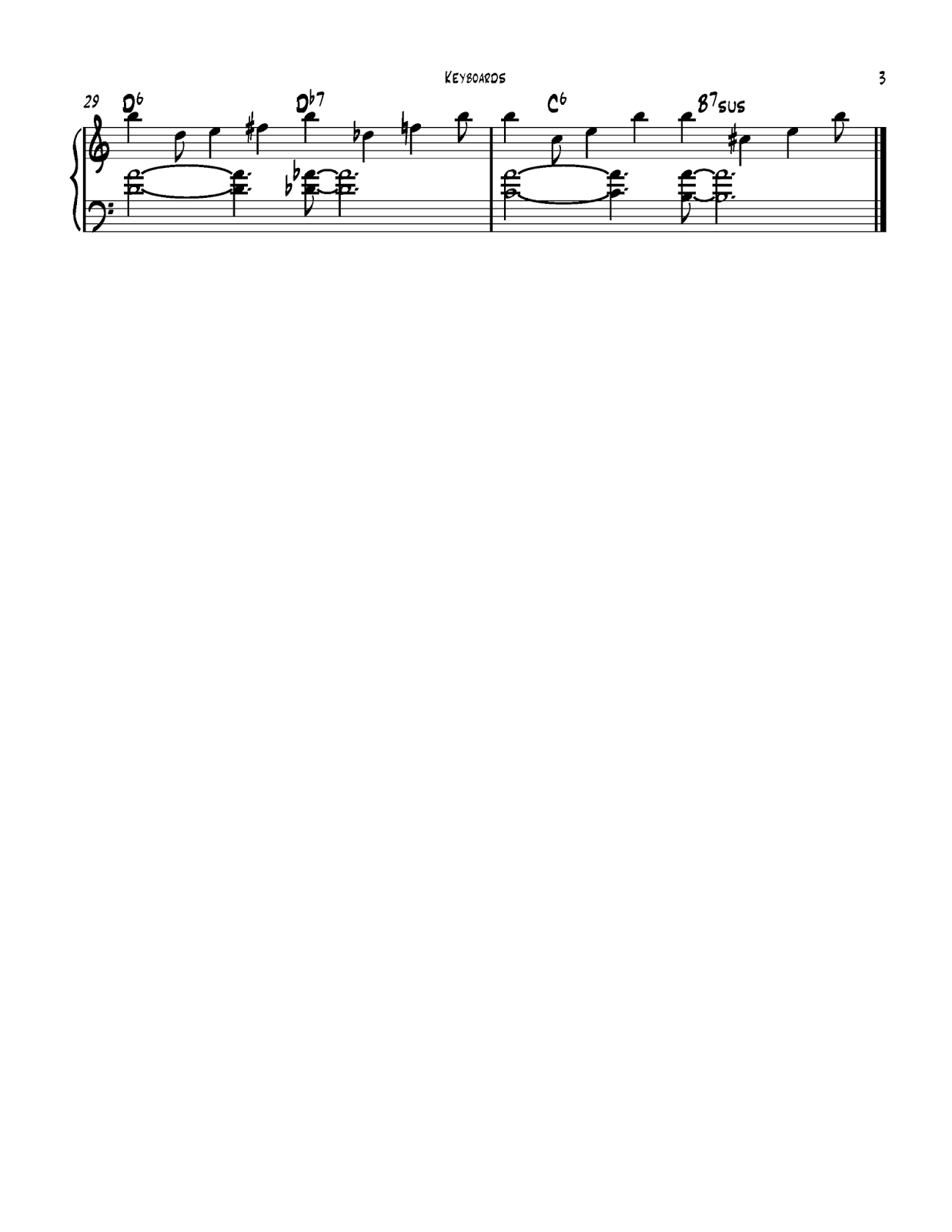