Frank Lozano at the Gesu 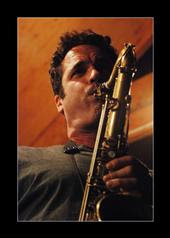 Frank Lozano performed this week in Montreal at the Salle du Gesu, THE best venue in Montreal to hear a band of any persuasion.  Frank is well known in Canada as one of Montreal's A-list tenor players. Having spent several years in Toronto Frank relocated to Montreal in the early 90's and has established himself as the city's most sought after sidemen and educators. It's been only recently that Frank released his first album as a leader.  The group performing this past Wednesday although not the same musicians as on the CD were also some of the city's most recognized musicians: Thom Gossage on drums, Adrian Veddady on Bass, and Francois Bourrassa on Piano all of whom enjoy high profiles of leaders of their own groups.  Frank's sound as a tenor player is both refined and exuberant. He is a musician who performs with the poise of player who has invested years of blood, sweat, and tears into his instrument.  When I hear Frank play I'm always floored by the depth of his creativity and the amount of control he has to develop his ideas. He has such a broad understanding of melodic language which allows him to rocket through chord progression and slip easily in and out of tonality but always with a firm foundation in melody, harmony and rhythm.  He is someone that is worthy of being a mentor to any student of jazz music not only because of his accomplishment on his horn but because he has found a way to make a success out of the jazz CAREER.

Unfortunately I'd like to steer the conversation away from Frank's talent and towards a subject that has recently been plaguing the Montreal jazz scene:  poor audience turnouts (aka "The cheapening"). I'd like to bring this up in connection to my post on the loss of the specialized sound recording grant and specifically with regard to my observation that even musicians won't spend money on music. Frank's concert was only just a reminder of how prevalent an issue this has become. I'd be very curious to hear what musicians from other cities feel about this where they are.

Sitting in the Gesu last Wednesday were barely a smattering of students and proffessionals not to mention a very under-represented saxophone demographic. There were however, jazz fans. Members of the media and the public whose love for music compelled them to leave the house and part with $15 to be rewarded with a superlative musical experience both in the quality of the musicianship and the quality of the environment.  In short this was a jazz EVENT in Montreal.

Where were the city's jazz students? (My appologies to the few students who I did see). Where the hell were you? This concert was well advertised.  The credentials of the musicians are well known.  This would have been an experienced which would have changed you.  There are 8-10 jam sessions in Montreal on any given week and I know that many of you attend these regularly.  You are easily spending $15 hanging out with friends and drinking $4 dollar pints.  Pardon my French but I'm tired of hearing pathetic excuses from you about why you don't attend the gigs of the most accomplished members of our community.

Your apathy towards the musicians who you should regard as your mentors will be of great detrement to you in several ways.  First of all you are missing out on the experience of mentorship.  This relationship that you develop with older musicians will have a greater influence on your musicianship and humanity than any Kurt Rosenwinkle album.  These musicians can be your musical parents if you let them.  By watching them play, talking to them, interacting with them they are imparting their life experiences as well as their musicianship. Its not just about lifting licks off of records.  Jazz is about living and living is about your relationship to your family and your community.

Secondly your mentors will play an important role in your transition from student to proffessional musician. Who do you think will give you your first proffessional experiences with older players? Who do think will recommend you for teaching positions?  There aren't any managers or record labels interested in you fresh out of school, that's for sure. What I am saying is that you are a part of a community that, whether you know it or not, you depend on for your artistic and proffessional success.

Thirdly, spending money on a gig is a great way to learn how to shut up and pay attention. This seems like a strange point to make but think about it. When you as a poor student part with $15 for a concert (that was a lot of money for me working a part-time job to get by while I was an undergrad at McGill) you are going to listen and absorb what is going on around you.  You're going to sit there and nurse your drink as slowly as possible just so that the club owner lets you stay for the next set.  This is going to make that experience a lot more intense and ultimately more rewarding musically than the "hang" with your friends at the jam session.  I'm not saying that hanging with your friends isn't also part of your over-all life experience. It just doesn't replace this valuable experience of mentoring the accomplished players in your own city.

Lastly, Every cent of your money spent on live music is not only an investment in the jazz community but its also a statement about who you are.  Considering the integrity and honesty that that jazz music evokes it would be best for you as musicians to, before you start complaining about how there aren't any gigs in town, put your money where your mouth is.
Posted by Josh Rager at 10:46 AM

Labels: On the art of learning